UPDATED May 2, 2019, after new films were added to the festival programming. 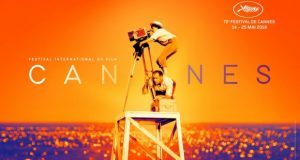 The 72nd annual Cannes Film Festival—set to take place in Cannes, Frances from May 14 to May 25, 2019—has announced its lineup of feature films. As previously reported, the opening-night film is the zombie flick “The Dead Don’t Die,” directed by Jim Jarmusch and starring Adam Driver, Bill Murray, Chloë Sevigny and Steve Buscemi. The most high-profile film at Cannes this year that is not screening in competition is the Elton John biopic “Rocketman,” directed by Dexter Fletcher and starring Taron Egerton as Grammy-winning superstar John. “Rocketman” is screening out of competition, and will premiere at Cannes on May 16. The festival is usually dominated by independent films, and Paramount Pictures’ “Rocketman” is one of the few Cannes movies this year from a major studio. “Rocketman” is due out in U.K. cinemas on March 24, and arrives in U.S. theaters on May 31.

There are 21 movies in competition at this year’s Cannes Film Festival. As expected, they are from several different countries and include a mix of famous and lesser-known directors. The high-profile directors who have films in competition this year are Quentin Tarantino with “Once Upon a Time in Hollywood”; Terrence Malick with “A Hidden Life”; Xavier Dolan with “Matthias and Maxime”; Pedro Almodóvar with “Pain and Glory,” also known as “Dolor y Gloria”; Ken Loach with “Sorry We Missed You”; Ira Sachs with “Frankie”; and Bong Joon Ho with “Parasite,” also known as “Gisaengchung.”

Other well-known directors who have movies at Cannes this year include Abel Ferrara with “Tommaso” and Werner Herzog with “Family Romance, LLC.” Both movies are not in competition at Cannes and will have special screenings.

The representation numbers went down this year for directors of Asian and Arab/Middle-Eastern descent in competition at Cannes. In 2018, there were four Asian (non-Middle Eastern) directors, compared to two in 2019: Bong Joon Ho with “Parasite,” also known as “Gisaengchung”; and Diao Yinan with “The Wild Goose Lake” also known as “Nan Fang Che Zhan De Ju Hui.” In 2018, there were three directors of from the Middle East in the Cannes competition. In 2019 there is just one: “It Must Be Heaven” director Elia Suleiman, who is a Greek-Palestinian.

For the second year in a row, Netflix is skipping Cannes, due to festival rules that movies allowed in the Cannes Film Festival competitions must be available for theatrical release in France for at least six months before they are released on home video or any streaming service. Netflix was at the 2017 Cannes Film Festival with “Okja” and “The Meyerowitz Stories (New and Selected)” before Cannes enforced this rule. Netflix was reportedly going to world premiere director Alfonso Cuarón’s “Roma” at the 2018 Cannes Film Festival, but since Netflix is boycotting Cannes for now, “Roma” ended up having its world premiere at the 2018 Venice Film Festival, where it won the top prize (the Golden Lion) , and ended up winning three Oscars.

Netflix might no longer be part of the Cannes Film Festival, but Amazon Prime Video is still participating. Amazon is at the 2019 Cannes Festival with a sneak preview of the episodic series “Too Old to Die Young – North of Hollywood, West of Hell,” a crime drama directed by Nicolas Winding Refn and starring  Miles Teller and Billy Baldwin.

New streaming services Apple+ and Disney+ are launching before the end of 2019, and it remains to be seen if they will submit any of their original content to the Cannes Film Festival. Based on what these streaming services have announced so far, they will both have original series and movies, but the majority of movies on Disney+ content will be Disney-owned movies that were already released in theaters. Therefore, Apple+ is more likely to have original movies that could potentially premiere at film festivals. It will be interesting to see how these new streaming services will affect the film-festival landscape in 2020 and beyond.

Here is the announced lineup of feature films at the 2019 Cannes Film Festival:

“It Must Be Heaven” (Directed by Elia Suleiman)

“Once Upon a Time in Hollywood” (Directed by Quentin Tarantino)*

“Sorry We Missed You” (Directed by Ken Loach)

“The Young Ahmed” (Directed by Jean-Pierre Dardenne and Luc Dardenne)

“The Climb” (Directed by Michael Covino)

“The Best Years of a Life” (Directed by Claude Lelouch)

“Too Old to Die Young – North of Hollywood, West of Hell” (Directed by Nicolas Winding Refn)

“The Gangster, the Cop, the Devil” (Directed by Lee Won-Tae)

“For Sama” (Directed by Waad Al Kateab and Edward Watts)

“Dwelling In The Fuchun Mountains” (Directed by Gu Xiaogang)

“Alice and the Mayor” (Directed by Nicolas Pariser)

“And Then We Danced” (Directed by Levan Akin)

“The Halt” (Directed by Lav Diaz)

“Song Without a Name” (Directed by Melina León)

“Give Me Liberty” (Directed by Kirill Mikhanovsky)

“To Live to Sing” (Directed by Johnny Ma)

“The Lighthouse” (Directed by Robert Eggers)

“Blow It to Bits” (Directed by Lech Kowalski)

“The Orphanage” (Directed by Shahrbanoo Sadat)

“For the Money” (Directed by Alejo Moguillansky)

“Tlamess” (Directed by Ala Eddine Slim)