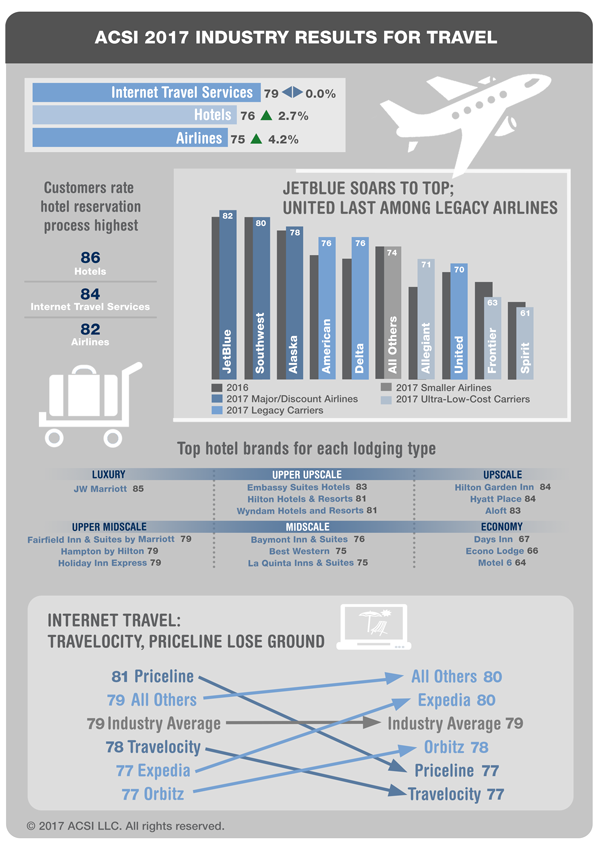 The following is a press release from American Customer Satisfaction Index:

Passenger satisfaction is up compared to a year ago, but airlines remain in the bottom third of industries tracked by the American Customer Satisfaction Index (ACSI). As the largest airlines lower their ticket prices to compete with discount carriers, the industry gains 4.2 percent to 75 on a 100-point scale. The ACSI results are based on thousands of customer interviews conducted over 12 months, ending in March 2017.

“Customer satisfaction has never appeared to be a goal for airlines,” says Claes Fornell, ACSI Chairman and founder. “Compared to other industries, the financial return on passenger satisfaction is not much of an incentive. The exception is in the few airports where airlines actually compete with one another – or when they treat passengers spectacularly badly in public.”

United’s violent removal of a passenger was captured on social media, but is not reflected in the ACSI results as it occurred after the completion of data collection. However, the incident did cause a fall in the company’s stock price. It is unclear how much impact it will have on future passenger satisfaction as United already has the lowest score among the legacy airlines.
Airlines.

According to passengers, the best airlines are JetBlue, Southwest and Alaska. JetBlue leads the industry with a 2-percent improvement to an ACSI score of 82, edging ahead of second-place Southwest, which is unchanged at 80. JetBlue’s low-cost business model and cabin upgrades appear to be paying off. Southwest continues to please passengers with policies like no charges for flight changes and no hidden extra fees. And unlike legacy carriers, the two airlines have a better track record for compensating passengers on overbooked flights.

Alaska Airlines is next, up 1 percent to 78 amid the early stages of absorbing Virgin America. Mergers tend to have a negative impact on customer satisfaction, but Alaska appears to be handling the transition rather well.

American (+6%) and Delta (+7%) tie at 76 – a record-high for American and the best score for Delta in more than two decades. The gains in passenger satisfaction are largely driven by price, but the customer experience also has improved. Over the past four years, American has invested roughly $20 billion in new aircraft, and passenger satisfaction has increased by 15 percent during that time. While Delta experienced a multitude of cancellations following bad weather in April, this occurred after the data collection period. Earlier in the year, computer outages caused a rough patch, but the company’s efforts to improve service, including the addition of in-flight meals on longer routes, appears to be sitting well with customers.

United is the lowest-scoring legacy airline, despite edging up 3 percent to 70. The combined score for “all other” smaller airlines is stable at 74. Allegiant is the most improved this year (+9% to 71). Frontier and Spirit, however, register declining passenger satisfaction. Frontier drops 5 percent to 63, followed by Spirit in last place (-2% to 61).

Guest satisfaction with hotels is up 2.7 percent to an ACSI score of 76, driven by gains for smaller hotels and B&Bs. With the rise of online hospitality brokers like Airbnb, travelers have more choices than ever before, forcing hotel operators to compete on both price and customer service.

Among hotel brands, luxury offering JW Marriott tops the chart (85), while upscale Hilton Garden Inn and Hyatt Place share the next spot at 84. Starwood’s Aloft, part of the Marriott family, comes in at 83, alongside Hilton’s Embassy Suites Hotels.

Wyndham holds the top-rated midscale property, Baymont Inn & Suites (76), as well as the best economy brand, Days Inn (67). However, the Wyndham family also has the lowest-ranked chain in the industry – Super 8 (63).

Customer satisfaction with travel websites for booking flights, hotels and car rentals is steady at 79. Expedia gains 4 percent to 80 and ties with the combined score of smaller travel websites (+1%). Other brands of the Expedia family, Orbitz (+1% to 78) and Travelocity (-1% to 77), are somewhat lower, as is competitor Priceline (77). Priceline’s score deteriorates 5 percent this year, dropping the company out of the lead it held in 2016.