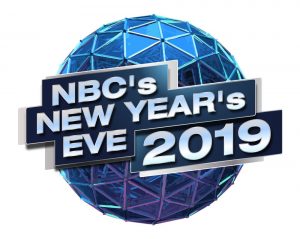 NBC begins 2019 with music’s biggest names in an evening that can’t be missed. “NBC’s New Year’s Eve” will feature performances by the incredible Diana Ross, Kelly Clarkson, Andy Grammer, John Legend and Blake Shelton. Carson Daly and Chrissy Teigen will host live from the heart of Times Square along with Leslie Jones.

Meanwhile, Keith Urban will join the telecast live from the Jack Daniel’s Music City Midnight: New Year’s Eve in Nashville event with a show-stopping performance of his own as well as an amazing performance by Brett Young. The 10th annual Nashville New Year’s Eve event will take place near the Tennessee State Capitol at Nashville’s Bicentennial Capitol Mall State Park. The music-filled evening caps off with a Music Note Drop and fireworks to ring in the new year.

Diana Ross is an American singer, actress and record producer. Born and raised in Detroit, Ross rose to fame as the lead singer of the vocal group the Supremes, which became Motown’s most successful act in the 1960s and one of the world’s best-selling girl groups of all time. Following her departure from the Supremes in 1970, Ross released her debut solo album, which contained the Top 20 pop hit “Reach Out and Touch (Somebody’s Hand)” and the #1 pop hit “Ain’t No Mountain High Enough.” She later released the album “Touch Me in the Morning” in 1973; its title track reached #1, as her second solo #1 hit. That same year, her album “Lady Sings the Blues,” which was the original soundtrack of her film based on the life of jazz singer Billie Holiday, went to #1 on the Billboard 200 Albums chart, selling more than 300,000 copies within its first eight days of release. By 1976, the “Mahogany” soundtrack included her third #1 hit, “Theme from Mahogany (Do You Know Where You’re Going To).” Her 1976 album included her fourth #1 hit, “Love Hangover.” In 1979, Ross released the album “The Boss.” Her 1980 semi-eponymous album “Diana” reached #2 on the Billboard Albums chart and spawned the #1 hit “Upside Down,” and the Top 5 international hit “I’m Coming Out.” Ross’ final single with Motown Records during her initial run with the company achieved her sixth and final #1 pop hit, the duet “Endless Love.” She is the recipient of the Grammy Lifetime Achievement Award in 2012. Ross has also ventured into acting, with a Golden Globe Award and Academy Award-nominated performance for her performance in the film “Lady Sings the Blues.” She also starred in two other feature films, “Mahogany” and “The Wiz,” later acting in the television films “Out of Darkness,” for which she also was nominated for a Golden Globe Award, and “Double Platinum.” Ross was named “Female Entertainer of the Century” by Billboard. In 1993, the Guinness Book of World Records declared Ross the most successful female music artist in history. She will be performing songs off her new holiday collection, “Wonderful Christmas Time.”

After winning season 14, Kelly Clarkson returned as coach for season 15 of NBC’s four-time Emmy Award-winning music competition series “The Voice.” Clarkson, who recently released her critically acclaimed eighth studio album, “Meaning of Life,” is among the most popular artists of this era with total worldwide sales of more than 25 million albums and 36 million singles. The Texas-born, Nashville-based singer-songwriter first came to fame in 2002 as the winner of the inaugural season of “American Idol.” Clarkson’s debut single, “A Moment Like This,” followed and quickly went to #1 on Billboard’s Hot 100, ultimately ranking as the year’s best-selling single in the U.S. Further, Clarkson is, without doubt, one of pop’s top singles artists, with 17 singles boasting multi-platinum, platinum and gold certifications around the world, including such global favorites as “Miss Independent” and “Because of You.” Clarkson has released eight studio albums (“Thankful,” “Breakaway,” “My December,” All I Ever Wanted,” “Stronger,” “Wrapped in Red,” “Piece By Piece,” “Meaning of Life”), one greatest hits album and two children’s books (New York Times Top 10 best seller “River Rose and the Magical Lullaby” as well as the recent follow up “River Rose and the Magical Christmas”). She is the recipient of an array of awards, including three Grammys, four American Music Awards, three MTV Video Music Awards, two Academy of Country Music Awards, two American Country Awards and a Country Music Association Award. She is also the first artist to top each of Billboard’s pop, adult contemporary, country and dance charts. In addition, this past year Clarkson hosted the “2018 Billboard Music Awards.”

Acclaimed multi-platinum pop singer and songwriter Andy Grammer is all about inspiring and empowering the world by communicating his truths through his music. Grammer has taken the music world by storm with a succession of anthemic pop hits, six of which are certified gold or better. His debut album featured the platinum singles “Keep Your Head Up” and “Fine By Me.” Grammer’s second album, “Magazines or Novels,” featured the triple platinum worldwide hit “Honey, I’m Good,” which was one of the best-selling songs of 2015, and the certified gold anthem “Good to Be Alive (Hallelujah).” Grammer’s third full-length album, “The Good Parts,” was released in December 2017 and includes his global smash hit “Fresh Eyes,” which has become a global streaming phenomenon with over 350 million total streams.

EGOT-winning, critically acclaimed, multi-platinum singer-songwriter John Legend has garnered 10 Grammy Awards, an Academy Award, a Golden Globe, a Tony Award and an Emmy Award among others. Legend is the first African-American man to earn an EGOT and one of only 15 people in the prestigious EGOT club. In 2016, Legend released his fifth studio album, “Darkness and Light,” to rave reviews and toured to sold-out audiences across the globe. Beyond his music career, he is a principle partner in Get Lifted Film Co., a film and television production company based in Los Angeles. Get Lifted Film Co. served as executive producers on NBC’s production of “Jesus Christ Superstar Live in Concert!,” the HBO documentary “Southern Rites,” 2018 Tribeca Audience Award winner documentary “United Skates,” WGN America’s series “Underground,” and films such as “Southside With You” and “La La Land.” In 2015, Legend initiated the #FREEAMERICA campaign in an effort to change the national conversation surrounding our country’s misguided criminal justice policies and to end mass incarceration. In April 2018, Legend released a new track, “A Good Night” featuring Blood Pop, and was Emmy nominated as Jesus Christ in NBC’s “Jesus Christ Superstar Live!” He also won an Emmy as producer of the telecast.

Blake Shelton returned to “The Voice” for the 15th season with the incredible accomplishment of being the coach for six champions over the course of the series, including season 13 winner Chloe Kohanski. Shelton’s other winners are Sundance Head, Craig Wayne Boyd, Danielle Bradbery, Cassadee Pope and Jermaine Paul. Shelton has a storied career laden with wins of his own. Shelton earned his latest honors with the 2018 CMT Video of the Year and Male Video of the Year awards for his recent chart-topping single “I’ll Name the Dogs.” He was named Top Country Artist of the Year at the 2017 Billboard Music Awards and ended the year as Billboard’s Most Played Country Artist. He is a 20-time ACM nominee and has taken home five CMA Male Vocalist of the Year trophies. His most recent album, “Texoma Shore,” was his sixth record to debut at #1 on the Billboard Top Country Albums chart and marked his 11th all-genre Top 10. “I’ll Name the Dogs,” the first single from the project, became Shelton’s 25th #1 song, a streak that began in 2001 with “Austin” from his debut album. His current single, “Turnin’ Me On,” is currently climbing the charts at country radio. Shelton was born, raised and lives in Oklahoma, where he has strong community ties. In response to the devastating tornadoes of 2013, Shelton and NBC teamed up on the telethon “Healing in the Heartland: Relief Benefit Concert.” With the help of Reba, Usher, Rascal Flatts, Vince Gill and Ryan Tedder of OneRepublic among others, the telethon raised more than $6 million for United Way of Central Oklahoma. He recently donated $500,000 to the Jimmy Everest Center, an Oklahoma University hospital for children with blood cancer and blood disorders. In association with Ryman Hospitality, Shelton has opened a string of entertainment-themed restaurants and bars called Ole Red. The first venue opened in 2017 in his hometown of Tishomingo, Okla., with the Nashville location following in June and another in Gatlinburg, Tenn., due this fall.

Keith Urban, 2018 CMA Entertainer of the Year and Grammy Award winner, recently released his new album, “Graffiti U,” in conjunction with his “Graffiti U World Tour 2018.” The album, which upon its debut on April 27, hit #1 on charts in the United States, Canada and Australia, and is Urban’s ninth. He’s had an album atop the all-genre charts in the U.S., Canada and Australia twice and is the only male country artist to have achieved the mark even once. He now stands at #8 on Billboard’s All-Time Country Airplay Chart as the artist with the most consecutive top 10 songs on Billboard’s Country Airplay Chart (38) – a streak that started in 2000. Besides four Grammys, Urban has won 12 Country Music Assn. Awards, 11 Academy of Country Music Awards, four People’s Choice Awards and four American Music Awards. He is also a member of the Grand Ole Opry. He’s long supported numerous charities, including the CMA Foundation, for which he is the first Ambassador, the Country Music Hall of Fame and Museum, St. Jude’s Children’s Hospital, for which he is an advisory board member, the Mr. Holland’s Opus Fund and the Grammy Foundation.

Academy of Country Music’s New Male Vocalist of the Year Brett Young’s sophomore album, “Ticket to L.A.,” is due Dec. 7 on BMLG Records, and its lead single “Here Tonight” is quickly rising on radio. The highly anticipated release follows his self-titled debut album, which became an instant success in 2017. The release dominated the Top 20 on the Country Albums chart for 37 weeks and quickly reached RIAA platinum certification. Delivering four consecutive #1 platinum-certified hits, Young became one of country music’s new class of hitmakers as each single climbed to the top of the charts, distinguishing himself with “In Case You Didn’t Know” as the first debut country artist since 2014 to garner 3x-platinum certification. The smash hit’s official music video has surpassed 200 million views, while Young was the only artist of 2017 with two efforts listed on VEVO’s Top Country Videos list. Young continues to impress the genre and beyond with nominations from Billboard, Teen Choice, CMT and CMA. He was recently named ASCAP’s 2018 Country Songwriter-Artist of the Year and awarded BMI’s 2018 Song of the Year for “In Case You Didn’t Know.” Above the industry successes, his relationship with fans found Young selling out every single stop on his debut headlining tour in 2017 and earning new followers on the road with Thomas Rhett. Young is currently on his headlining “CMT on Tour: Here Tonight” through the end of the year.