The following is a press release from Fox:

With over a quarter of a billion monthly listeners in the U.S. and over 131 million social followers, iHeartMedia has the largest national reach of any radio or television outlet in America. As the leading media company in the U.S., iHeartMedia serves over 150 local markets through 849 owned radio stations, and the company’s radio stations and content can be heard on AM/FM, on satellite, at iHeartRadio.com, on the company’s station websites and on iHeartRadio, iHeartMedia’s digital music, podcast, on demand and live streaming radio service, available on over 250 platforms and 2,000 devices, including on digital auto dashes, tablets, wearables and smartphones, on virtual assistants, smart speakers, TVs and gaming consoles.

iHeartRadio offers users the country’s top live radio stations, personalized custom artist stations created by just one song or seed artist, on demand features and the top podcasts and personalities. The all-in-one digital service has more than 1.7 billion downloads, 110 million registered users and is the No. 1 commercial radio podcaster in the U.S.

The following is a press release from CMT:

The show kicked off with a star-studded tongue-in-cheek sendup that has the royal family in Nashville to escape the prying paparazzi, only to find themselves engulfed in the bachelorette party capital of the country. The sketch featured Kelly Ripa, Ryan Seacrest, hosts Little Big Town, Blake Shelton, Kelsea Ballerini, Midland, Dustin Lynch, Jake Owen, Jon Pardi, Trace Adkins, Darius Rucker (as the Queen, no less), and Florida Georgia Line as Princes William and Harry.

Little Big Town got the crowd jumping with their first-ever live performance of the danceable “Summer Fever” surrounded by large gold orbs, while Blake Shelton took to the rooftop of his new restaurant, Ole Red, in downtown Nashville for an intimate performance of his hit “Turnin’ Me On.”

Bordered by a dramatic white curtain, Jason Aldean delivered a stirring rendition of his hit “Drowns the Whiskey,” while Kelsea Ballerini offered a beautiful twist on love with her hit, “I Hate Love Songs.”

Florida Georgia Line turned the Bridgestone Arena into a cozy backyard get-together with the first-ever-live performance of their new single “Simple,” while Carrie Underwood dazzled the audience with her soaring power ballad “Cry Pretty.”

Sam Hunt roamed the streets Nashville’s famed Broadway before taking the outdoor stage in front of thousands of country music fans and fireworks for first-ever-performance of “Downtown’s Dead,” while Dan & Shay, in their first-ever CMT Music Awards appearance, delivered a sobering sweeping rendition of their smash, “Tequila.”

Chris Stapleton’s unmistakably powerful voice boomed through the streets of downtown Nashville for a priceless performance of “Millionaire,” while pop royalty Backstreet Boys got the entire house dancing with an electric first-time-ever performance of their new single, “Don’t Go Breaking My Heart,” proving that great music transcends genres.

The evening concluded with a bang as Darius Rucker and The Troublemakers – Jason Aldean, Luke Bryan and Charles Kelley – turned the Bridgestone Arena into a local honky tonk with their first-ever-live performance of the seminal Drivin’ N Cryin’ classic, “Straight To Hell.”

VIDEO OF THE YEAR
Best video of the year; awarded to the artist (male, female, group/duo or collaboration). Final nominees announced the morning of the show, with final voting held on social media during the live telecast.

MALE VIDEO OF THE YEAR
Best video by a male artist; awarded to the artist

FEMALE VIDEO OF THE YEAR
Best video by a female artist; awarded to the artist

DUO VIDEO OF THE YEAR
Best video by a duo; awarded to the artists

GROUP VIDEO OF THE YEAR
Best video by a group; awarded to the artists

BREAKTHROUGH VIDEO OF THE YEAR
Best video from an artist’s major breakthrough album; awarded to the artist (male, female or group/duo)

COLLABORATIVE VIDEO OF THE YEAR

Best video from a collaboration; awarded to the artists

CMT PERFORMANCE OF THE YEAR

Musical performance on a television show, series or variety special on CMT; awarded to the artist (individual, group or duo)

CMT is the leading authority on country music and lifestyle, offering a mix of original series, music events and specials. CMT is everywhere its fans are including two cable channels (CMT and the 24-hour music channel, CMT Music), radio (CMT Radio), digital (CMT App, CMT.com) and social (CMT on Facebook, CMT on Instagram and CMT on Twitter). CMT is a unit of Viacom Inc. (NASDAQ: VIA, VIAB). 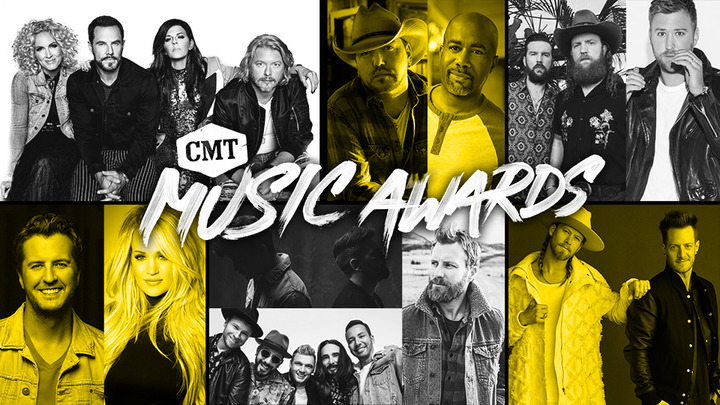 The following are excerpts from CMT press releases:

CMT also revealed today that country music’s loudest night is about to get even louder with two star-studded collaborations; country icon Dierks Bentley featuring “Video of the Year” nominees Brothers Osborne, as well as “CMT Performance of the Year” nominee Darius Rucker featuring Jason Aldean (who is tied for most “CMT Music Awards” nominations), Luke Bryan and Charles Kelley. More performers to be announced in the coming days.

Last week, the first round of “2018 CMT Music Awards” performers were announced including Blake Shelton, Chris Stapleton, Kelsea Ballerini, Luke Bryan and Sam Hunt. It was also revealed that pop superstar Kelly Clarkson will premiere her rendition of iconic rock hit, “American Woman,” from the promotional campaign for the upcoming Paramount Network series of the same title debuting the day after the Awards on Thursday, June 7 at 10pm ET/PT. Inspired by the real-life upbringing of Kyle Richards (“Real Housewives of Beverly Hills”), “American Woman” follows Bonnie (Alicia Silverstone), an unconventional mother struggling to raise her two daughters after leaving her husband with the help of her two best friends, Kathleen (Mena Suvari) and Diana (Jennifer Bartels) in 1970s Los Angeles.

This announcement follows renewed ratings growth and critical acclaim for CMT music specials and events due in part to a creative refresh featuring current and genre-bending artist pairings and pro-social elements. In October, “CMT Artists of the Year” notched its highest rating to date and now ranks as one of the fastest growing award shows, while “CMT Crossroads” recently garnered its highest ratings in five years with an episode featuring Backstreet Boys and Florida Georgia Line. The network recently finished its highest-rated quarter since 2014 and notched its fifth consecutive quarter of year-over-year ratings growth. April 2018 was CMT’s best April performance in 4 years, extending to 17 the channel’s streak of consecutive months of year-over-year ratings growth among Adults 18-49 and Women 18-49. (L+SD, CMT Total Day)

CMT and the PEDIGREE brand are teaming up for the first “Paws & Play” Music Festival in Nashville on Sunday, June 3. The free event is the official kickoff to “CMT Music Awards” week and celebrates the role four-legged family members play in making lives better. Dogs (and their humans) can participate in a number of family-friendly events, including performances by country singer/songwriter, The Voice champion and CMT Music Award winner Cassadee Pope, doggie yoga, canine massage, games, photo opps, food trucks, a beer and wine garden and much more. The event is hosted in association with adoption partner, Nashville Humane Association, who will feature adoptable dogs onsite looking for fur-ever homes. No RSVP necessary.

Get up close and personal with Nashville’s hottest rising country stars at this exclusive CMT concert            at the city’s newest hangout, TopGolf. Scheduled to perform are Devin Dawson, Walker Hayes and LANCO. Must RSVP to attend. Event is 18 and up.

Bar-S and CMT invite you to kick off the summer with the ultimate downtown block party, featuring live music and free food for the whole family. Festivities include performances and meet-and-greets with artists Bailey Bryan, Kelleigh Bannen and The Sisterhood Band, along with carnival games, prizes and a chance to win tickets to the CMT Music Awards on Wednesday night.

Performances are as follows:

Get down before the world gets up! A one-of-a-kind morning workout event, CMT Sweat is the can’t-miss kickoff to the CMT Music Awards, powered by Barry’s Bootcamp. Join some of Barry’s top national trainers for an early-morning workout, and enjoy a performance by singer/songwriter Kalie Shorr, music curated by DJ Ivy, appearance by Danielle Bradbery and other surprise guests as they turn your early morning into the ultimate calorie-shredding exercise session. Must RSVP to attend.

Bar-S and CMT invite you to kick off the summer with the ultimate downtown block party, featuring live music and free food for the whole family. Festivities include performances and meet-and-greets with artists Carly Pearce, Morgan Evans, Tyler Rich and Delta Rae, along with carnival games, prizes and a chance to win tickets to the CMT Music Awards on Wednesday night.

Performances are as follows:

CMT and Hershey’s are throwing a free karaoke party all day long from the heart of downtown Nashville. Fans are invited to hop on the karaoke RV, grab a mic and belt out Country Gold hits. Enjoy free Hershey’s Gold, a digital photo booth and certified gold prizes, including a chance to attend the CMT Music Awards on Wednesday night.
###

Events are free and open to the public. Some events require advance registration. RSVP links included above.