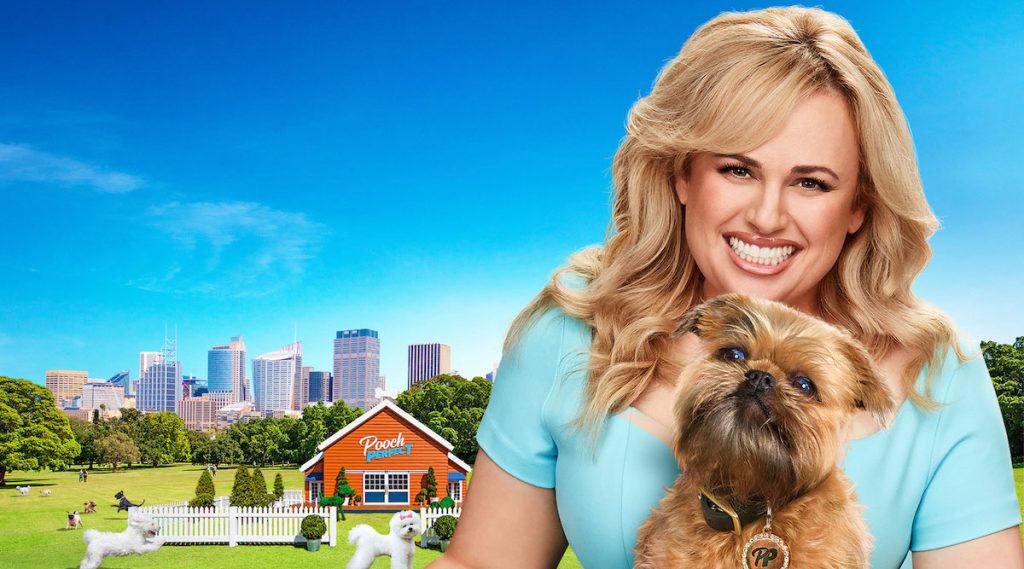 The following is a press release from ABC:

Hosted by award-winning actress Rebel Wilson, “Pooch Perfect” is the ulti-mutt dog grooming competition series. The eight-episode serieswill showcase 10 of the best dog groomers in the country, along with their assistants, competing in a series of paw-some themed challenges.

Each week on “Pooch Perfect,” teams will compete in the Immunity Puppertunity challenge, where one team will earn immunity from elimination. Then, in the Ultimutt Challenge showdown, the remaining teams will face off in an epic grooming transformation, which they will show off on the illustrious dogwalk. The trio of all-star celebrity judges – Lisa Vanderpump, Jorge Bendersky and Dr. Callie Harris – will be tasked with voting on the incredible creations and ultimately force one team back to the doghouse every week. It all leads up to the season finale where the top three teams compete for a giant cash prize and the coveted “Pooch Perfect” first place trophy.

“Pooch Perfect” is produced by Beyond Media Rights Limited. Elan Gale, Sonya Wilkes and Rebel Wilson serve as executive producers. Nicole Anthony, Mike Rosen, Carley Simpson and Matthew Silverberg serve as co-executive producers. ABC’s “Pooch Perfect” is based off of the Australian format. Episodes can also be viewed the next day on demand and on Hulu.

The Host, Judges and Season 1 Contestants

Inspired by the social platforms and coffee table book from celebrity dog grooming expert Jess Rona, each episode will include imaginative challenges and out of the box themes meant to spotlight the best looks for man’s best friend. Featuring comedic commentary from celebrity guests and a host, Rona will lead the judging panel with the Best in Show winner walking away with a cash prize and first place rosette.

Jess Rona built a following online with her signature slo-motion blow dry videos and serves as the dog grooming artist to many celebrity dogs. In addition to grooming, she is the author of Groomed, the director of Tegan and Sarah’s Closer video, and has appeared on Drunk History and New Girl.

“Jess Rona has made a name for herself as dog groomer-to-the stars and it is so fun to be able to bring her incredibly successful online brand and business to life in this way, ” said Jennifer O’Connell, executive vice president of original non-fiction and kids programming for HBO Max. “Expect pure escapism that the whole family can watch together and root for their favorite pooch with the most fabulous and creative trans-fur-mations.”

Hot Dog is a comedy competition series from JAX Media as they continue to expand their slate into the unscripted space.

“We are very excited to work with Nicolle, Jess and HBO Max on this very important project. There’s no better time to watch a dog get a bath than now,” says JAX Media’s partners Tony Hernandez, Lilly Burns, Brooke Posch and John Skidmore.

The series will be executive produced by Jax Media’s Tony Hernandez, Brooke Posch and Séamus Murphy-Mitchell along with Making It’s Nicolle Yaron and Jess Rona. Abi McCarthy has been tapped as showrunner.

The most adorable competition series ever created, each episode features three dog groomers facing off over two rounds. Rogers provides comedic commentary as Rona leads the judging panel with her extensive knowledge of breeds and proper grooming techniques, with Thede serving as “haute” expert evaluating the outrageous and jaw-dropping transformations. The judges determine who wins Best in Show, with the lucky groomer walking away with $10,000 and a first place rosette. Rona’s coffee table book Groomed and social platforms, including her signature slo-motion blow dry videos, inspired the series.

Jax Media completed production of the series over four weeks this summer in Simi Valley following full union guidelines and COVID protocols, with zero positive results from cast, crew and producers. Tests were conducted regularly across four weeks of production from load in to strike.

About JAX MEDIA
Founded in 2011, JAX Media is a television and film production juggernaut run by Partners Tony Hernandez, Lilly Burns, John Skidmore and Brooke Posch with offices in New York, Los Angeles and London. Jax Media has created a production model that allows talent to maintain control of their content and the results have been answered with awards and critical acclaim. As a company, they provide comprehensive production from development through post with a highly experience in-house production team who expertly implements the unique Jax Media model that has proven itself time and time again as a success for studios, networks and creatives alike. Jax Media currently has 11 shows in production and was nominated for 18 Emmy Awards for the 2018-2019 TV season alone

The following is a description from HBO:

“Well Groomed” is a documentary that explores the exuberant world of competitive dog grooming and follows the lives of dog owners who are challenging the definition of art.

The film offers a rare look into the lives of dog owners who are dedicated to transforming their poodles into living sculptures. It delves deep into an all-consuming subculture of America where the motivation to win drives them into devoting their lives to the competition.

The documentary follows a group of determined dog groomers who are driven to succeed while facing a series of challenges in each of their personal and professional lives over the course of a year. It will also offer a peek into their limited-time outside the ring, where they groom other people’s dogs, care for own pets and test out new designs on their show dogs.

Here are excerpts of some reviews of “Well Groomed”:

The Hollywood Reporter: “With its benign view of the world it captures, ‘Well Groomed’ asks us to laugh along with the cheerful women on camera. Its non-intrusive approach leaves the door open, just a crack, for anyone ready to laugh at people who turn their dogs into turkeys and chickens.”

The Playlist: “Remarkably, the element that heightens the film’s enjoyability is its pure-hearted nature. Even at its darkest moments, ‘Well Groomed’ never lingers too long on sorrow to knock the movie off-course. Moreover, while the subject matter of creative grooming encompasses enough oddball characteristics to float on its own, the documentary wisely opts to focus on the personalities of the groomers.”

POV Magazine: “A boon for any dog lover or someone just wanting to learn about this subculture, ‘Well Groomed’ is a slight yet generally satisfying look into this odd topic. Larger questions about the exploitation of the animals, the obsessions of the individuals for their pets at the expense of people, etc. are left aside for a gentle film about an intense but agreeable competition.”