The Rolling Stones, Katy Perry, Dave Matthews Band, Jimmy Buffett & The Coral Reefer Band, Chris Stapleton and Bob Seger & The Silver Bullet Band are among the headliners at the 50th New Orleans Jazz & Heritage Festival, which will take place at the New Orleans Fairgrounds from April 25 to April 28 and from May 2 to May 5, 2019. It will be the first time that the Rolling Stones will perform at the event, which is also known as Jazz Fest,

March 30, 2019 UPDATE: The Rolling Stones have canceled their Jazz Fest 2019 performance on May 2 because lead singer Mick Jagger is being treated for an undisclosed medical problem. Click here for more information.

April 8, 2019 UPDATE: Fleetwood Mac has canceled its Jazz Fest 2019 performance due to singer Stevie Nicks having the flu. The band has postponed four of its tour dates because of the illness. Jazz Fest issued this statement that said in part: “Stay tuned for updates about May 2 talent and tickets.” 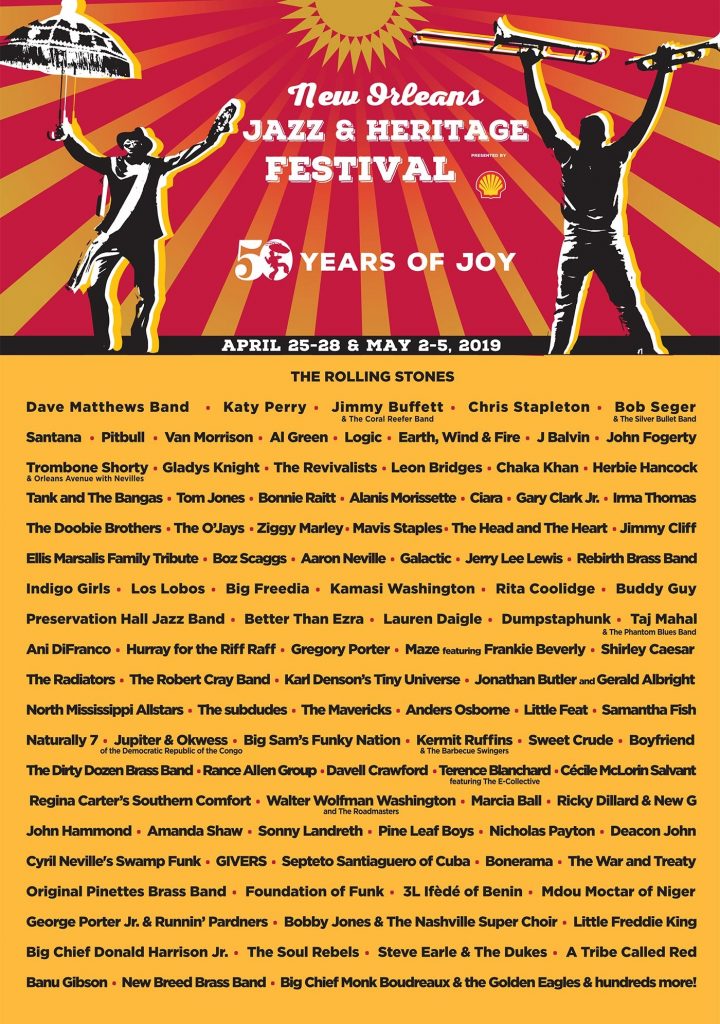 The following is a press release from Fashion Footwear Association of New York:

The Fashion Footwear Association of New York (FFANY) is excited to announce that Grammy-nominated singer, songwriter, television personality and footwear designer, Katy Perry, will serve as the 2018 PSA Ambassador for the 25th Anniversary of “FFANY Shoes on Sale.” QVC has been a proud sponsor for the last 24 years, providing support and awareness across all ecommerce and multi-platform engines.

Katy Perry has continuously offered her support of women battling breast cancer.  As a beloved and creative member of the footwear industry with a strong voice for style and substance, Perry is the ideal PSA Ambassador. Perry’s footwear line, Katy Perry Collections, is inspired by her travels, humor and extraordinary imagination. Perry designs each of the collections to reflect her distinct personality. FFANY is honored to partner with Perry for this landmark of the 25th Anniversary and to help move one step closer to a breast-cancer-free world.
“I’m proud to be able to partner Katy Perry Collections with FFANY and QVC in the fight against breast cancer,” said Katy Perry. “This is an issue that is near and dear to my heart, especially because my aunt passed away from it in 1986. I have always been proud to support the cause and am grateful to have yet another platform to help find a cure.”
Over the past 24 years, “FFANY Shoes on Sale,” which joined forces with QVC in 1995, has generated $55 million to help bring us closer than ever to finding a cure for breast cancer. Once again, the Fashion Footwear Charitable Foundation is pleased to announce that grants will be distributed to nine leading cancer institutions in the United States. This star-studded event attended by industry notables and celebrities will recognize the generosity of footwear donors and designers, to benefit the researchers who are committed to finding a cure.
“FFANY is honored to have Katy Perry as our 2018 PSA Ambassador,” said Ron Fromm, President and CEO of the Fashion Footwear Association of New York. “She is a champion for strength, endurance, compassion and has a deep commitment to building a better community – qualities that have great resonance with the battle against breast cancer and the quest for a cure.”

The gala will be held at the Ziegfeld Ballroom in New York on Thursday, October 11, 2018. The nearly 10,000 square foot main ballroom was host to the 2017 QVC Presents “FFANY Shoes on Sale” gala as the first event in the newly renovated space.

The following is a press release from MTV:

MTV has announced global pop superstar Katy Perry will host the 2017 MTV Video Music Awards live from the “Fabulous” Forum in Inglewood, Calif. on Sunday, August 27 at 8:00 p.m. ET/PT.  In advance of the world tour for her most recent, chart-topping album, Witness, Perry will light up the stage as the first performer announced for this year’s show.  Earlier this week, she secured a spot as one of the top nominees for the 2017 VMAs with nods in five categories, including: Best Pop, Best Direction and Best Visual Effects for “Chained to the Rhythm,” Best Art Direction for “Bon Appetit,” and Best Collaboration for Calvin Harris’ “Feels” featuring Pharrell Williams, Perry and Big Sean.

“I’ve been training with MTV in zero gravity, eating astronaut ice cream, and I’m on a group text with Buzz Aldrin and Neil deGrasse Tyson,” said Katy Perry.  “Come August 27th, I’ll be ready to be your MOONWOMAN! Brace for impact, kids.”

“We’re thrilled to have global phenomenon Katy Perry as the host and a performer at the 2017 VMAs,” Bruce Gillmer, Head of Music and Music Talent, Global Entertainment Group, Viacom.  “She is at the forefront of music culture and the perfect person to anchor this year’s show, which promises to be one of the most diverse and music-filled in VMA history.”

Katy Perry’s new album, “Witness” (Capitol Records), debuted at No. 1 on the Billboard 200, marking her third album to debut atop the chart. It marked the biggest week for an album by a female artist in 2017. It also claimed the No. 1 spot on Billboard’s Top Current Albums and Current Pop Albums charts. Globally, “Witness” topped the iTunes Albums chart in 46 countries.

The official video for “Bon Appétit,” which can be seen HERE, set a new record for Katy, surpassing 100 million views in just 18 days. Her video for “Firework” just passed one billion, while “Dark Horse” and “Roar” have all surpassed two billion.  This year Katy’s iconic song “Roar” earned a Diamond certification surpassing the 10-million threshold counting song sales and streams in the United States. “Roar” follows previously Diamond-certified songs “Dark Horse” and “Firework,” and makes her the first artist in the Recording Industry Association of America to earn three RIAA Diamond Song Awards.  Additionally, she reached a new milestone on Twitter as the first person to reach 100 million followers; Katy has been the most followed person on Twitter since 2013.

MTV released the full list of nominees for the 2017 “MTV Video Music Awards” earlier this week in a first ever Instagram live collaboration between an elite squad of nine Instagram stars. The announcement revealed Kendrick Lamar leading the pack with eight nominations for his video “HUMBLE.” Katy Perry and The Weeknd are tied with five nominations each, following closely behind is Bruno Mars and DJ Khaled tied with four, and Ed Sheeran and Alessia Cara tied with three nominations each.  Performers and presenters will be announced at a later date.

Fans can vote for their favorites across eight VMA categories, including “Video of the Year,” “Artist of the Year,” “Best Collaboration” and more by visiting www.vma.mtv.com.  Additionally, voting for the Best New Artist award, presented by Taco Bell, will remain live through the 2017 MTV Video Music Awards Pre-Show airing at 7:00 p.m. ET/PT.  The top two artists will be revealed during the pre-show, kicking off a live Twitter hashtag vote with the winner being announced during the live main telecast.  Nominees for the socially voted category, “Best Song of Summer,” will be announced at a later date.

Ariana Grande was among the star performers at her One Love Manchester concert, which took place on June 4, 2017, at  Old Trafford cricket ground in Manchester, England. According to several published reports, the concert raised about $3 million to $12 million through ticket sales and donations. About 50,000 people attended the show, which also included performances by Katy Perry, Justin Bieber, Coldplay, Pharrell Williams, Niall Horan of One Direction , Robbie Williams, Black Eyed Peas, Miley Cyrus, former Oasis singer Liam Gallagher, Little Mix, Marcus Mumford, Imogen Heap, Mac Miller and Take That. Proceeds from the show will go to the Red Cross’ Manchester fund, to benefit victims and their families of the suicide bombing that killed 22 people and injured about 59 people after Grande’s Manchester Arena concert on May 22, 2017. Those who were at Grande’s May 22 concert were eligible for free admission. The show was telecast in the U.S.  on Freeform. ABC showed highlights of the concert. MTV and the Red Cross had live webcasts of the show on their respective websites. BBC had a live telecast of the concert in the U.K.

Salman Abedi, a 22-year-old resident of Manchester, is reported to have been the suicide bomber. Several of his associates have been arrested in relation to the mass murder. The remaining dates of Grande’s tour have been postponed or cancelled until further notice.

Here are some video highlights of the concert:

Ariana Grande will be among the star performers at her One Love Manchester concert, set to take place June 4 2017 at  Old Trafford cricket ground in Manchester, England. Katy Perry, Justin Bieber, Coldplay, Phatrell Williams, Niall Horan of One Direction , Miley Cyrus and Take That. Proceeds from the show will go to the Red Cross’ Manchester fund, to benefit victims and their families of the suicide bombing that killed 22 people and injured about 59 people after Grande’s Manchester Arena concert on May 22, 2017. Tickets go on sale on June 1, 2017 via Ticketmaster. Those who were at Grande’s May 22 concert will be given free admission. TV viewers in the U.S. can watch the show on Freeform at 2 p.m. Eastern Time. ABC will show highlights of the concert  at midnight Eastern Time. BBC will have a live telecast of the concert in the U.K.

Grande posted this statement on  her official Internet accounts: “My heart, prayers and condolences are with the victims of the Manchester attack and their loved ones. There is nothing I or anyone can do to take away the pain you are feeling or to make this better. However, I extend my hand and heart and everything I possibly can give to you and yours, should you want or need my help in any way.

“We will not quit or operate in fear. We won’t let this divide us. We won’t let hate win … Our response to this violence must be to come closer together, to help each other, to love more, to sing louder and to live more kindly and generously than we did before.”

Salman Abedi, a 22-year-old resident of Manchester, is reported to have been the suicide bomber. Several of his associates have been arrested in relation to the mass murder.

The remaining dates of Grande’s tour have been postponed or cancelled until further notice.

May 31, 2017 UPDATE: Black Eyed Peas have been added to the concert lineup. In order to accommodate the One Love Manchester concert, British TV network ITV has moved two TV shows on its schedule: the season finale of “Britain’s Got Talent” will now be held June 3, 2017, while the British Soap Opera Awards has moved from June 3 to on June 6, 2017.