With three prizes each, BTS, Doja Cat and Megan Thee Stallion were the top winners at the 2021 American Music Awards, which were presented November 21 at Microsoft Theater in Los Angeles. Cardi B was the host of the ceremony. ABC had the U.S. telecast of the show. The American Music Awards are voted for online by fans.

Several artists won two awards each, such as Olivio Rodrigo, Taylor Swift, Bad Bunny, Cardi B, Carrie Underwood and Gabby Barrett. (See the complete list of winners at the end of the article.) Rodrigo went into the ceremony with the most nomnations (seven), followed by The Weeknd with six nods. The Weeknd ended up winning the award for Favorite Male R&B Artist. New categories this year were Favorite Trending Song (with nominees from TikTok on the year’s most viral songs); Favorite Gospel Artist; and Favorite Latin Duo or Group.

According to a press release from ABC: “Nominees are based on key fan interactions—as reflected on the Billboard charts—including streaming, album sales, song sales and radio airplay. These measurements are tracked by Billboard and its data partner MRC Data, and cover the time period September 25, 2020, through September 23, 2021.” The 2021 American Music Awards ceremony was produced by MRC Live & Alternative and Jesse Collins Entertainment.

The following is from an ABC press release:

The following is the complete list of winners and nominees for the 2021 American Music Awards:

The 2021 BET Hip Hop Awards brought the hottest names in Hip Hop back to Atlanta, for the annual taping. Comedy supergroup 85 South (Karlous Miller, DC Young Fly, and Chico Bean) hosted this year’s awards from The Cobb Energy Centre which premiered on Tuesday, October 5 on BET, BET Her, MTV2 and VH1. Watch an encore airing of the award show Tuesday, October 7 at 9 PM ET/PT on BET. Cardi B and Megan Thee Stallion ruled the night by jointly snagging three wins each including Song of the Year, Best Hip Hop Video and Best Collaboration for their smash hit “WAP.” [Editor’s note: Cardi B and Megan Thee Stallion did not attend the ceremony.] Tyler, The Creator took home two wins for Hip Hop Album of the Year and Best Live Performer in addition to his Rock the Bells Cultural Influence Award  presented by LL Cool J.  Jay Z scored double wins in the Sweet 16: Best Featured Verse and Impact Track [cagtegories] for his Nipsey Hussle collaboration “What It Feels Like.” Newcomer Yung Bleu was crowned Best New Hip Hop Artist while rap sensation Saweetie took home Hustler of the Year. Music icon Missy Elliott was voted Video Director of the Year and Lyricist of the Year went to J. Cole. UK rapper Little Simz took home the Best International Flow award.

Young Thug kicked off the night with an explosive performance of “Tick Tock” followed by Gunna with “Too Easy” before coming together with their hit collaboration “Ski.” Hot new rapper Bia performed her smash single “Whole Lotta Money,” then brought out Atlanta icon Lil Jon for “Bia Bia” to close it out. Baby Keem made his award show debut with “Family Ties.” Hip Hop sensation Latto brought the house down with a sparkling, high energy performance of “SoufSide” and new song “Big Energy” while Tobe Nwigwe made it a family affair with Fat and Nell on their song “Fye Fye.” Isaiah Rashad performed alongside Doechii and Kal Banx for “Wat U Sed” before ending the set with his solo single “From the Garden.” The hotly anticipated cyphers were hosted by DJ Hed and featured a bevy of emcees dropping hot sixteens including Grip, D Smoke, Smino, Tierra Whack, Rico Nasty, Sleepy Hallow, Erica Banks, Fivio Foreign, Toosii, Lakeyah, Kidd Kenn and Symba. Presenters for the evening included a trio of Hip Hop powerhouses Trina, Remy Ma, and Rapsody. “I Am Hip Hop Award” recipient Nelly closed out the show with a performance of his greatest hits including “Country Grammar,” “Hot In Herre,” “Air Force Ones,” “Dilemma,” “Grillz” with an appearance by Paul Wall and more.

The following is the complete list of nominees and winners of the 2021 BET Hip Hop Awards:

HIP HOP ALBUM OF THE YEAR

SONG OF THE YEAR

HIP HOP ARTIST OF THE YEAR

LYRICIST OF THE YEAR

VIDEO DIRECTOR OF THE YEAR

DJ OF THE YEAR

PRODUCER OF THE YEAR

HUSTLER OF THE YEAR

For more information about the BET Hip Hop Awards, including the digital red carpet livestream powered by Bulldog DM, the latest news and updates, visit bet.com/hiphopawards and follow the conversation @BETAwards

The following is a press release from CBS and the Recording Academy:

About the Recording Academy

The Recording Academy® represents the voices of performers, songwriters, producers, engineers, and all music professionals. Dedicated to ensuring the recording arts remain a thriving part of our shared cultural heritage, the Academy honors music’s history while investing in its future through the Grammy Museum®, advocates on behalf of music creators, supports music people in times of need through MusiCares®, and celebrates artistic excellence through the Grammy Awards®—music’s only peer-recognized accolade and highest achievement. As the world’s leading society of music professionals, we work year-round to foster a more inspiring world for creators.

The following is a press release from Founders Entertainment:

Founders Entertainment is proud to announce the lineup for the 2019 Governors Ball Music Festival. The ninth annual edition of New York City’s very own homegrown fest will take place from Friday, May 31 through Sunday, June 2 on beautiful Randall’s Island Park. Featuring performances from Florence + The Machine, Tyler, The Creator, The Strokes, Lil Wayne, SZA, Nas, The 1975, Kacey Musgraves, Major Lazer, Brockhampton,  Louis The Child, Mitski, and many more, Governors Ball will showcase 70 artists throughout the weekend. Full festival lineup and poster below.
Three–day GA and VIP tickets (including payment plan options) will be available via GovBall.com beginning today at 8:00 AM ET at special “Announce Day” pricing until 11:59:59 PM ET. Regular pricing begins on January 8 at 12:00 AM ET. At the time of purchase, Gov Ball ticket buyers will have the option to add a limited edition, festival branded phone charger to their order, so attendees can ensure their mobile remains juiced from the first note played at the festival until the rideshare home from an epic Gov Ball After Dark show later that night.
For full pricing breakdown including VIP packages and payment plan options visit: GovBall.com

This year Governors Ball will celebrate its ninth consecutive running as “New York’s biggest summer bash” (Rolling Stone), and one of the premier live music events on the planet. Last June, over 10 million worldwide viewers tuned in to the live broadcast of the internationally renowned festival, which was praised by performers and press alike. Pharrell proclaimed it “one of the best shows N.E.R.D had ever had in New York City,” and Vic Mensa was enamored by the “really special” and “uniquely strong” energy brought by the crowd. Stereogum noted that the festival has consistently set itself apart from the crowd, writing that “Governors Ball has always strived to have a bit more of a personality than most high-profile festivals, adding in touches you just wouldn’t get anywhere else.”

Founders Entertainment is honored to once again bring those special touches and attention to detail to Governors Ball patrons at the festival grounds on Randall’s Island Park (supported, maintained and programmed by the Randall’s Island Park Alliance www.randallsisland.org). The 2019 festival will feature a signature lineup of the best food NYC has to offer, as well as craft coctails and a brand new beer experience. Between sets, attendees can take in and enjoy surprise pop up performances, play lawn games, explore street art from internationally known artists, and enjoy the relaxing and restorative 21+ Best Kept Secret area. Late night, music fans disperse throughout the city to take in intimate performances from Governors Ball artists as part of the After Dark concert series. All of these elements come together to create the “only in New York” experience “Gov Ball” has become known and loved for.

Patrons looking to take their festival experience to the next level have many options for the weekend. VIP ticket holders can take advantage of a separate fast lane at each festival entrance, and access to all 21+ VIP Viewing Areas, which feature up-close prime viewing, comfy seating, shade tents, flushable bathrooms, specialty food vendors, cell phone charging stations, for hire massage services, and a beer, wine and liquor bar. VIP Plus tickets (only 125 available) go a step beyond the traditional VIP experience, with access to a very exclusive, elevated viewing platform with incredible views of the main stage that comes with comfortable lounge seating, and all-inclusive beer, cocktails, and wines and waiter service. And the Platinum VIP program treats ticket holders as if they were an artist performing at the festival, with a personal festival concierge, exclusive on-stage viewing (restrictions may apply), access to a very exclusive Front of House viewing area at the festival’s four stages, a plush backstage open bar and lounge, and more. Full details on VIP options can be found here. 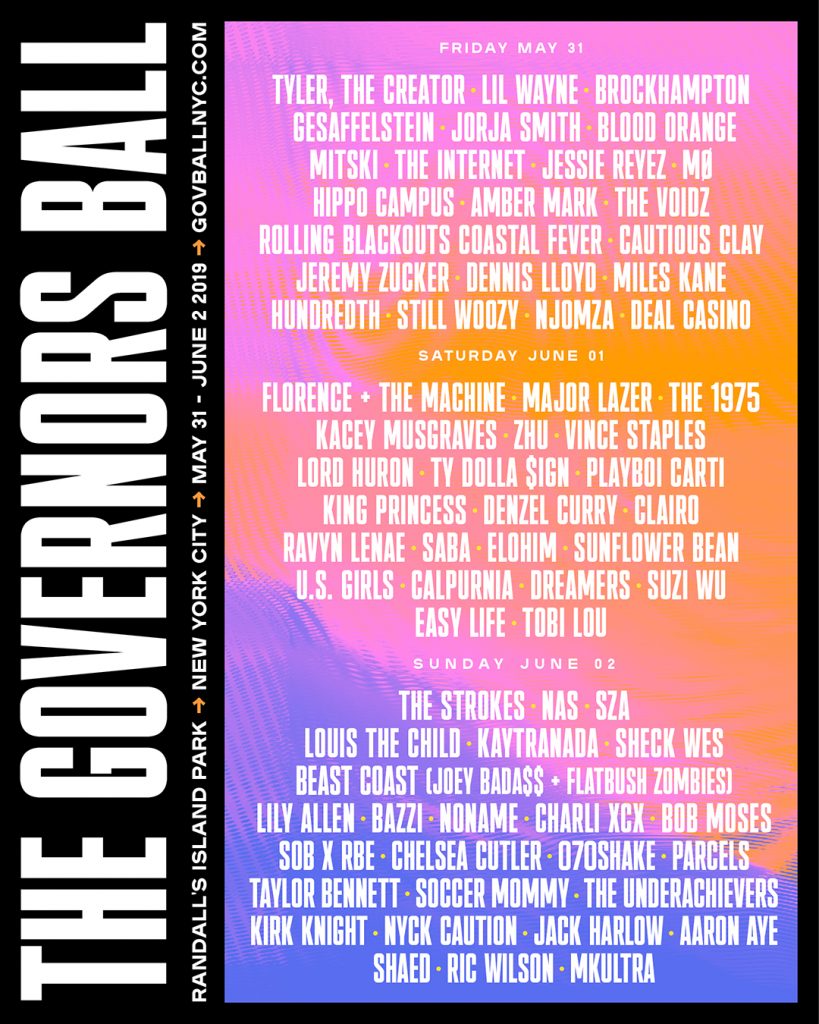